That’s what my 6YO said the last week in May, when I held up a sparkly, red spaghetti strap costume loaned to me as a “guest performer” in a dance recital produced by my friend Nancy. My daughter has played in an old wardrobe box from the attic, full of flapper fringe, tutus, sequins and tails, all of my dance recital costumes from 20+ years ago -- which are now her dress-up clothes.

Naturally, that kind of “razzle-dazzle” red dress must be for her. Right?

Like Mother’s Day and the Byron Nelson Golf Tournament, dance recitals were a perennial part of The Month of May when I was young. I got to wear pretty costumes, put on light green eyeshadow, pink lipstick and boogie to “Another One Bites The Dust,” “Boy from New York City,” “Greased Lightning,” or that perennial favorite, “Puttin’ on the Ritz.” As young as age 7, I remember whiling away afternoons in the basement of SMU’s McFarlin Auditorium or the halls of a local high school waiting to be called on stage for dress rehearsal.

That said, MY last dance recital was May 1988: “Funkytown,”” Faith” and “Summertime Blues." (From when I was a student of the Buster Cooper School of Dance in north Dallas, though I also had many recitals with Mimi Robbins whose studio is now called Dance Etc.)

Which is why when my friend Nancy asked if I wanted to be a part of her spring show, I giggled inside and then wanted to shout “YES!”

Did it bring up a few insecurities? Hell yes it did. Did I pay them much attention? Not really. Because that's one of the differences between dance recitals at ages 17 and 38.

But at 17, I didn't share a stage with two former Broadway dancers whose long careers included working with choreographers Michael Bennett and Bob Fosse and making music videos that people actually watched -- all during the same time period when I was learning "Jellicle Cats" in a suburban strip mall dance studio.

So insecurities, what say you now? How will you wear that sparkly red dress? 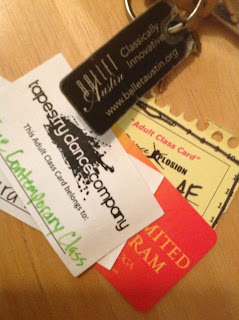 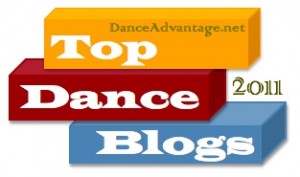